Rest Project is created to do rest api (actually any http/https request) testing or autotest. Each rest project case can organize any numbers of Apis as you like.

Here is a virsual view of a rest project case: 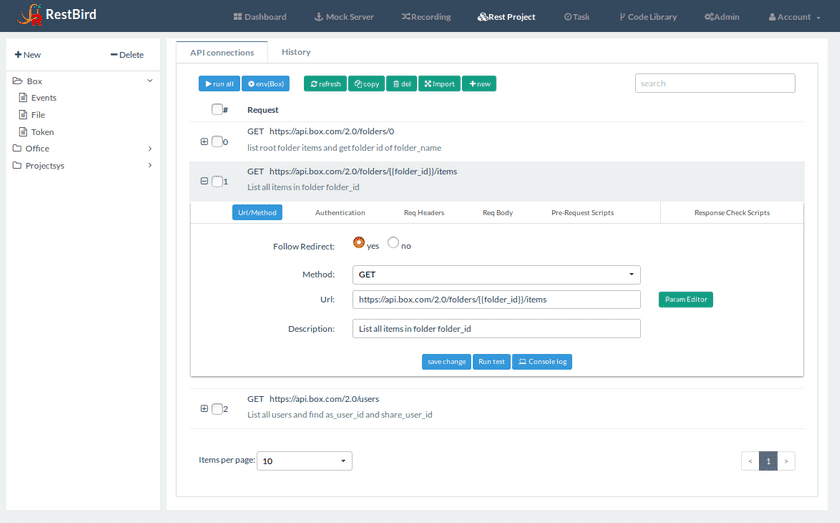 In Api set, you can create two types of API:

Rest Project supports both Python and Golang programming, we can choose what we like at the project case creation.

To create a Rest Project Case through the web portal, you can : 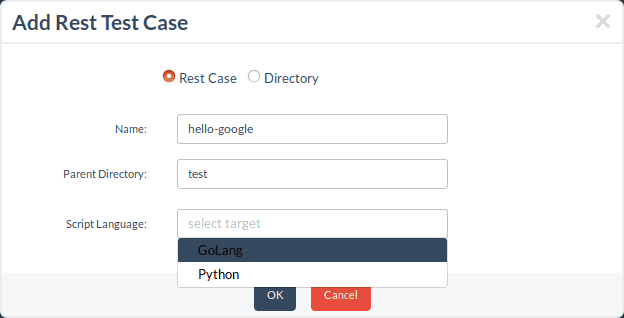 Now, the ‘hello-google’ case was created.

Beside the web portal, you can also create project cases directly under the porject directory of the host OS.

When you create a rest project case, you need to select a script language between Python and Golang.

Once the script language is selected, all rest apis in that case will use that language for advanced programming, like Pre-Request , ResponseValidation, Pure Script.

Take ‘hello-google’ case for example, let’s add a rest api to test it. 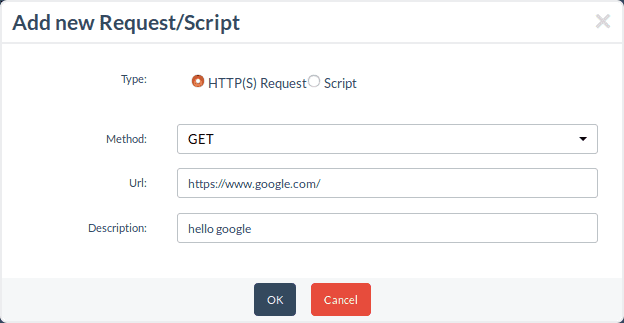 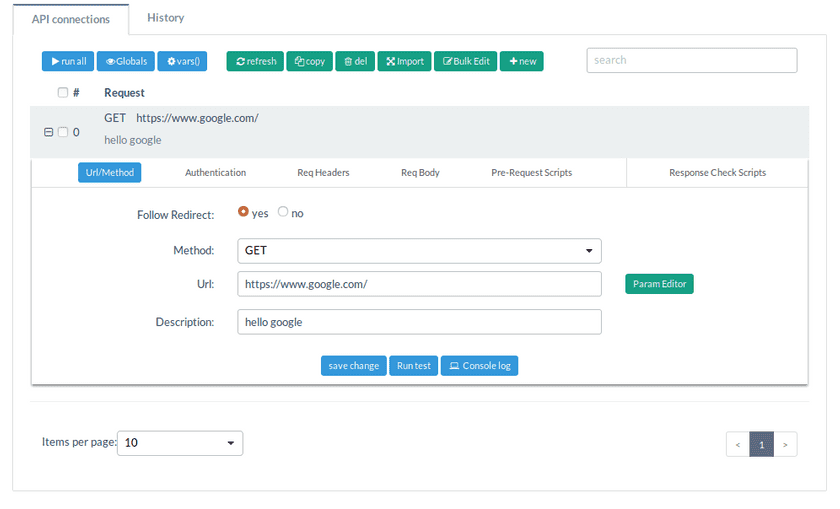 Here is a visual view of an Rest Api:

To build a http request, you don’t have to write a single line of code if you like. Just provide all the http request infomation under tabs Url/Method, Authentication, Req Headers and Req Body.

Environment varibles can also be used in all fields, we will talk it later.

Some times the visually request builder is not enough, we want to do more advanced jobs by programming the Http Request. The pre-Request callback Script is the place we can do it.

Base on the script language you select while creating the case, the ‘pre-request’ callback script could be a block of Python script or golang script, which will be called just before we send out the http request. So it could overwrite any infomation you provided through the visually request building.

Here is a golang example to add “Header” to the Http Request in callback:

Here is a python example to add “Header” to the Http Request in callback: 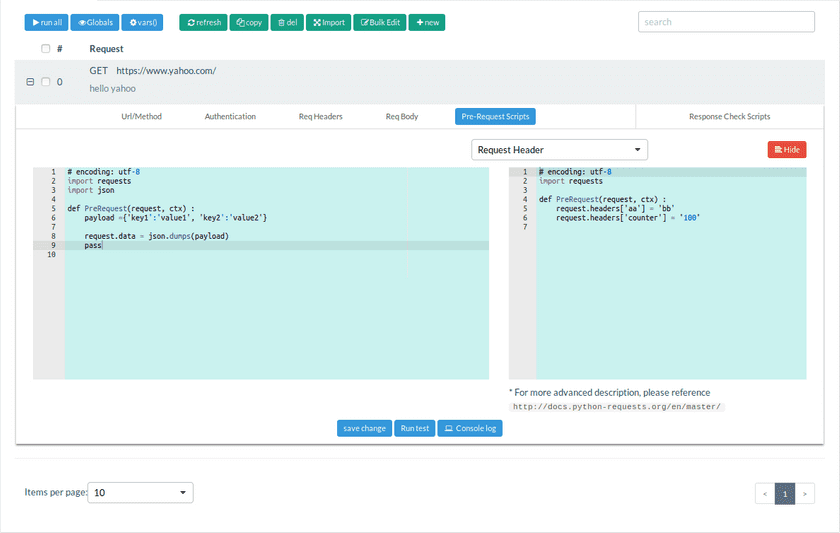 Click the ‘Example’ button under the ‘pre-request’ tab, you will bundles of examples codes of pre-request scripts. You don’t even to be farmilar with that programing language, you can do program here.

Response Validation Script is a callback script that will be called to check the HTTP Response when we received it.

We can check any content of the response, like status code, res header and body data. Then return true if everything looks fine, or fasle if you think the Response is not expected.

Based on the script language you select while creating the case, the ‘responsevalidation’ callback script could be a block of Python script or golang script.

Click the ‘Example’ button under the ‘responsevalidation’ tab, you will bundles of examples codes of responsevalidation scripts. You don’t even to be farmilar with that programing language, you can do program here.

‘Pure Script’ is just a block of code, which will be called like sending a http request while execution. You can do anything here, like access the varibles, sleep a while before sending next rest api, call other apis… 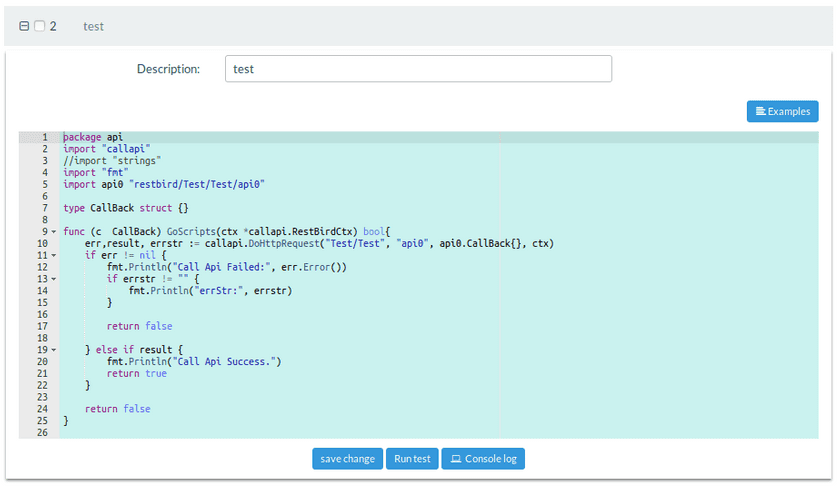 Based on the script language you select while creating the case, ‘Pure Script’ could be a block of Python or golang script here.

Every rest project case can bind a group of varibles. All the varibles in the group can be used and updated at request building, response validation or Pure script.

Bind a project case to a group of varibles by click the “vars” button under the case.

we can also add/delet/modfy these varible definitions in the varible editor. 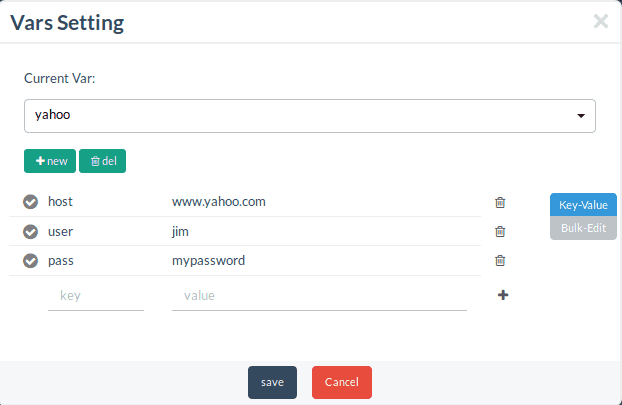 sometimes we would like to share something between a runing rest project and a runing tasks, we can use following method to access the global shared varibles

There are two ways to run a created Api.

For every run of a rest api or a group of api, a history record will be generated under the History tab: 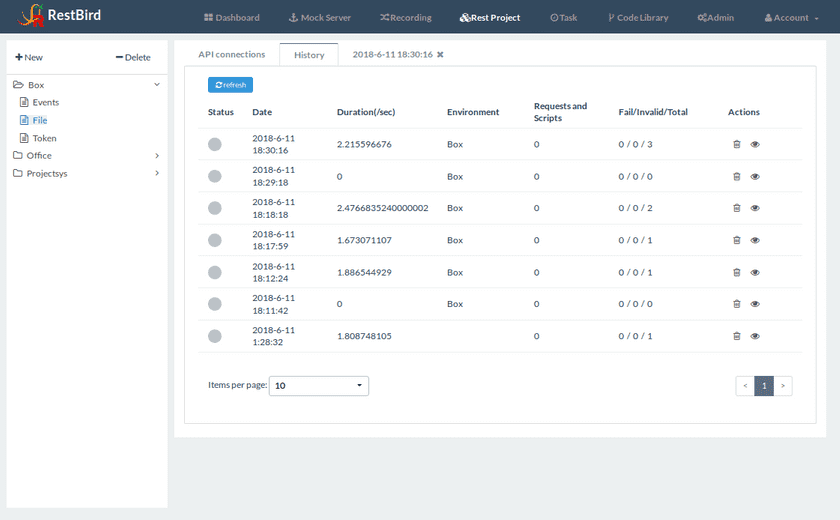 click the row of the history table, you will see the detail infomation of that execution. 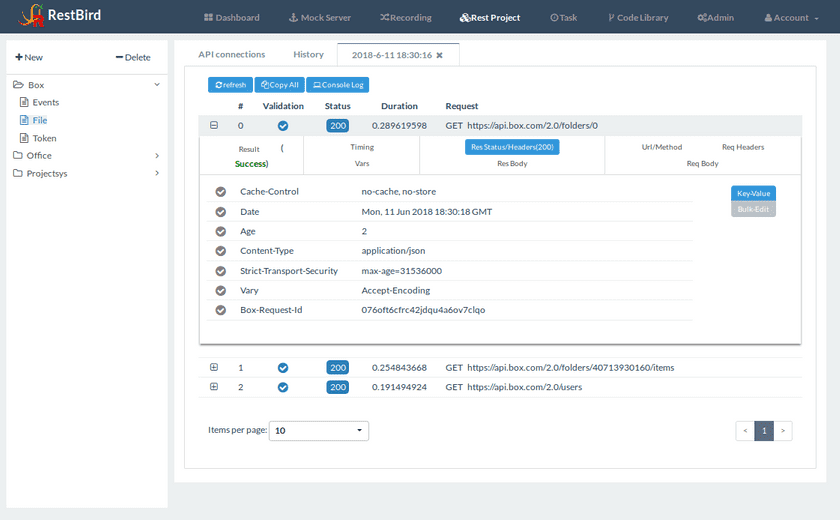 Select the Apis you want to copy, then click copy button. we can copy Rest APis to current rest project or any other rest project.